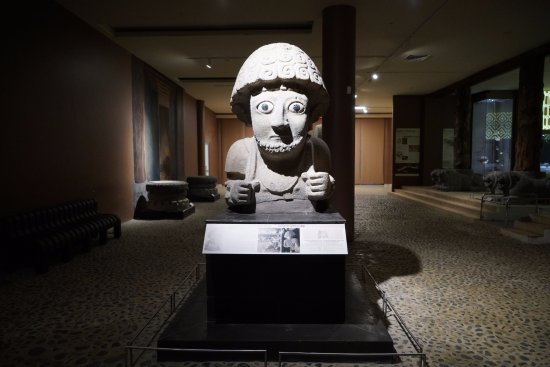 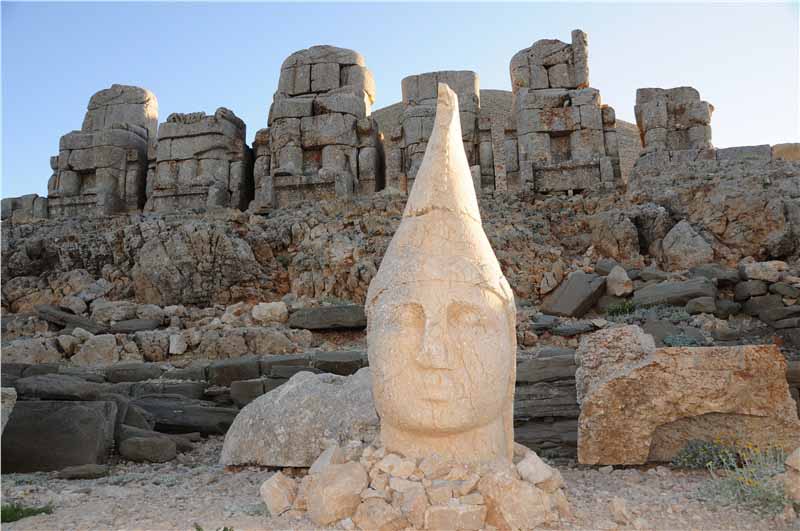 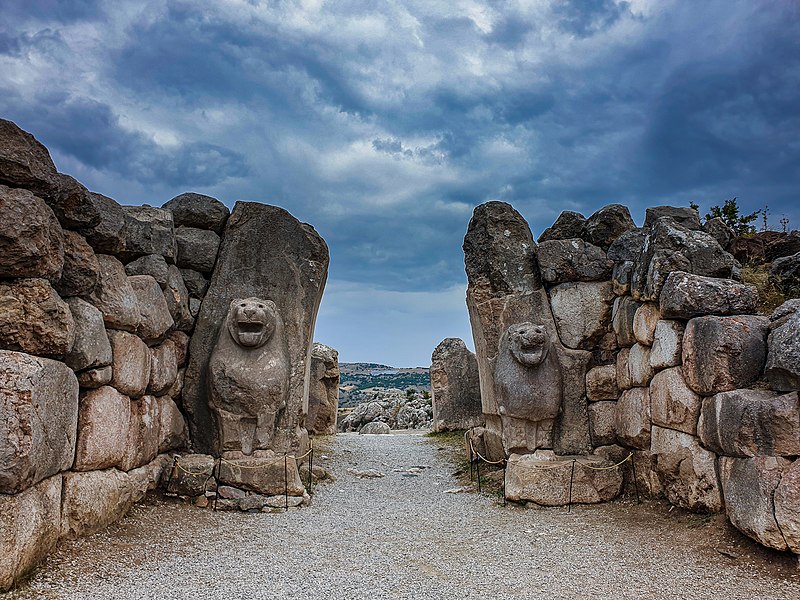 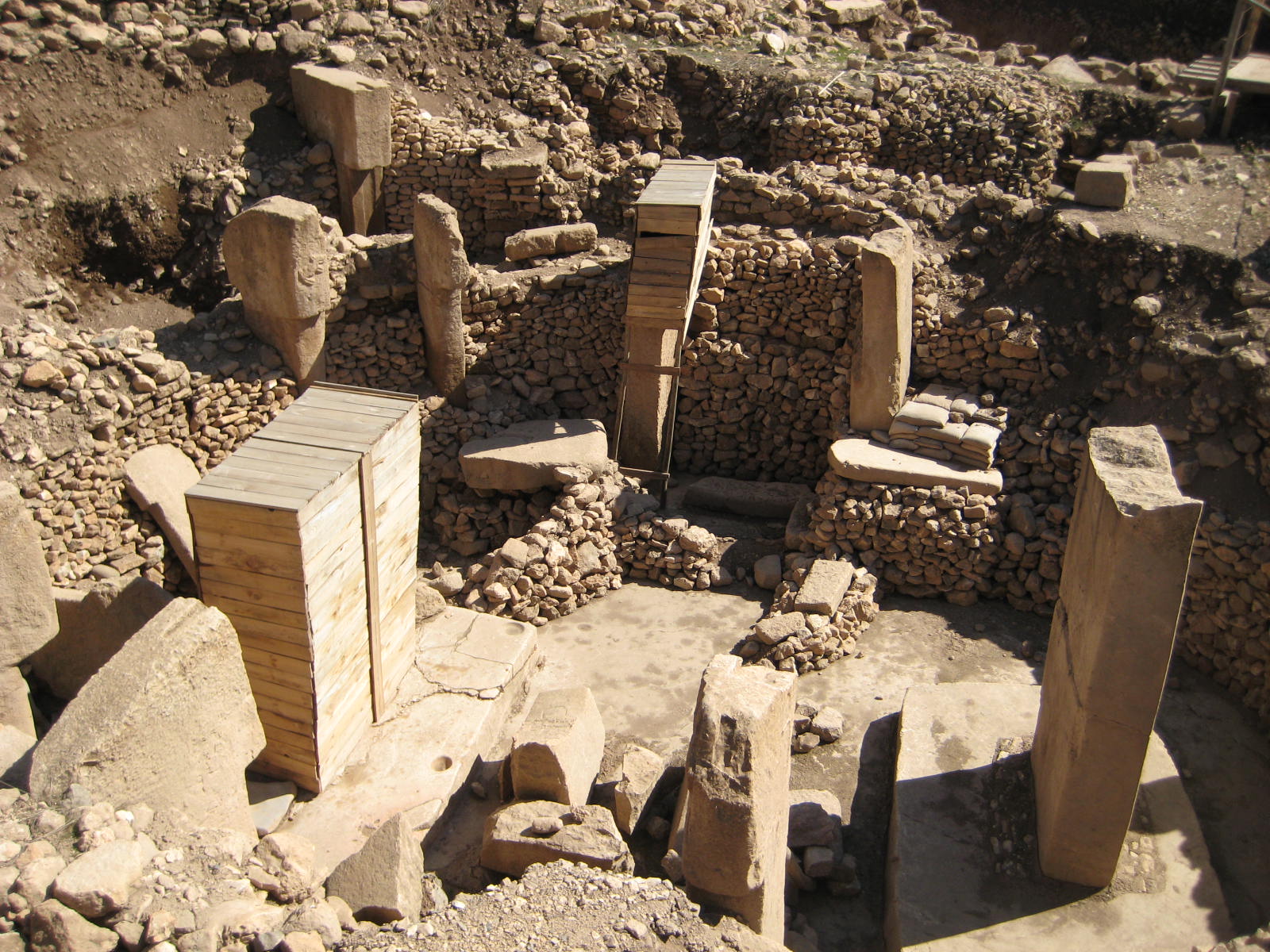 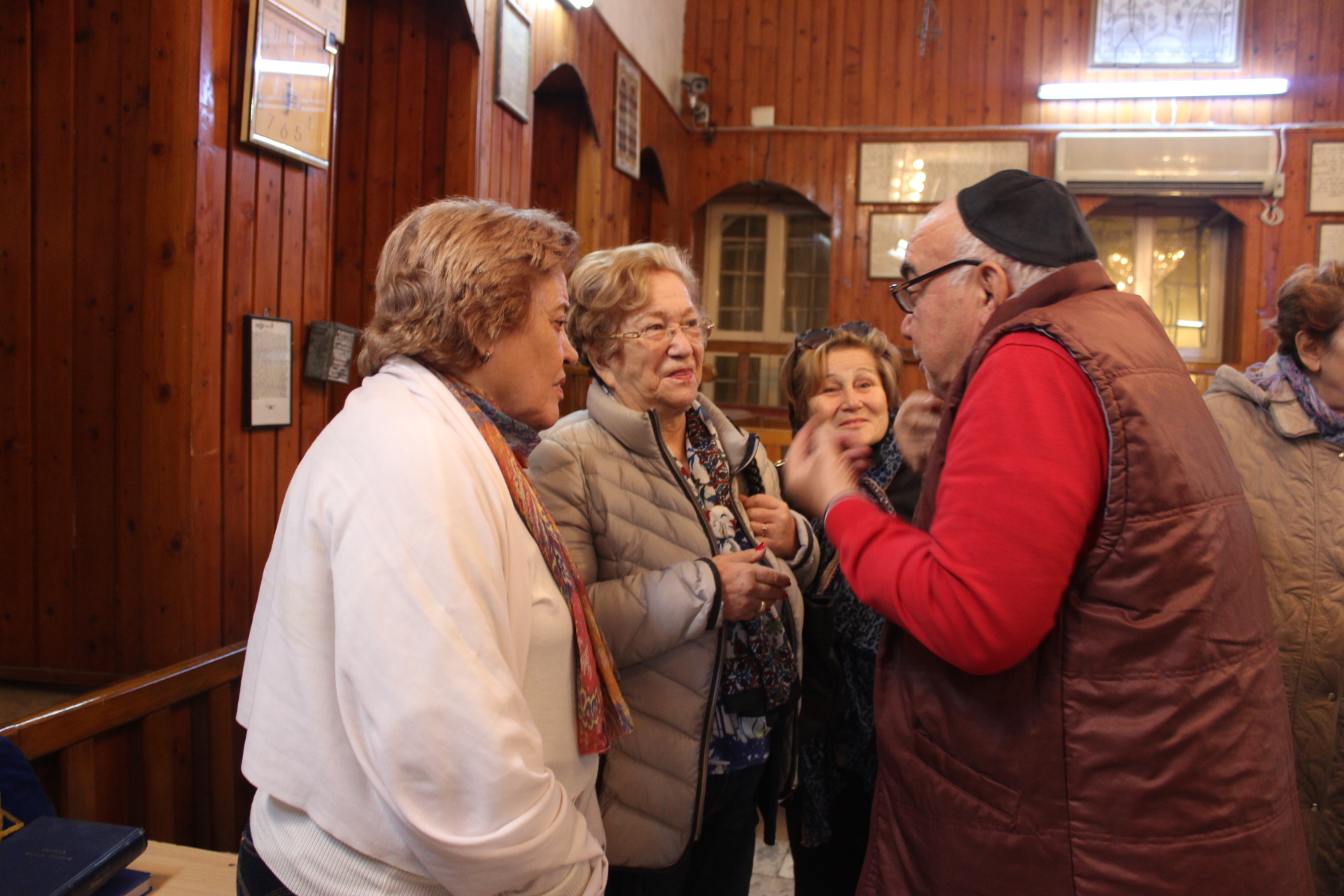 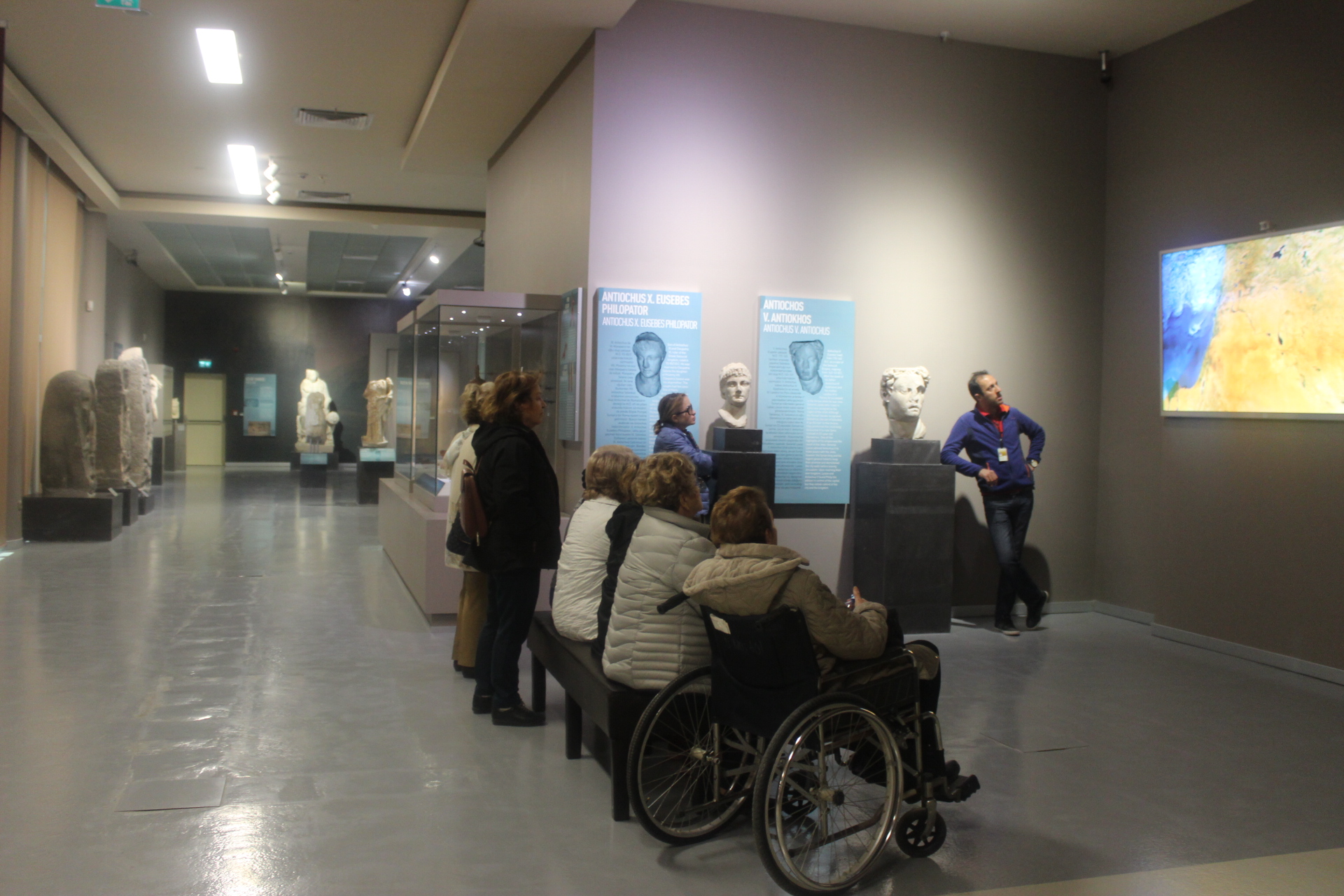 Anatolia is described as a melting pot of civilizations and cultures among many other things which are all in a way accurate. However what is most certain is the fact that Anatolia has the unnerving habit of turning up “ Lost Civilizations “ and “ Vanished Cultures”. There is not a year that goes by without some new antiquity discovery emerging in these lands. This tour is the archeology lover’s dream.

Highlights of the trip

Day 1 - Fly into Istanbul airport where a Fields of Anatolia representative will meet you and take you to your hotel. The rest of the day is free to relax or explore. Overnight in Istanbul.

Day 2- Morning flight from Istanbul to Adiyaman. In the afternoon, take a tour of the area including a visit tothe Roman-era Cendere Bridge, Karakus Tumulus and Arsemia. Then climb Mount Nemrut, exploring the East and West terraces and arrive in time to watch the sunset from the mountain's peak overlooking the Euphrates valley. Overnight in Adiyaman.

A mountain of around two thousand metres, Mount Nemrut is home to the tomb of the pre-Roman king, Antiochus I Theos of Commagene. Built by the king himself in about 62 BC as a shrine to his own remains, the site consists of two large statues of Antiochus which dwarf two statue pairs of eagles and lions, and various Iranian, Greek and Armenian Gods.  It is the perfect place to experience a sunset or sunrise as the views from the summit are sublime.

Day 3 - After breakfast, drive to Urfa . Take your time to visit ancient Göbekli Tepe before heading to the Urfa Museumto take in the incredible exhibits from Göbekli Tepe and other ancient sites in the region. Overnight in Urfa.

Göbekli Tepe, the oldest place of worship in the world, is an archaeological site without equal. Prior to its discovery in 1994 and its subsequent excavation it was widely believed by anthropologists that religion evolved as a result of living in larger communities which was itself the result of the change from foraging to agriculture. However, Göbekli Tepe has turned our theories of our own evolution on their head. The vast religious site dates from the hunter gatherer period and there is no evidence of any agriculture or even human habitation, suggesting that it may have been the emergence of religion that lead us to civilisation and thus to agriculture.

The site contains a vast array of circular structures and huge pillars, some with beautiful limestone carvings of lions, foxes, snakes and birds, believed to be gatekeepers of the entrance to the next world. There are striking similarities to sites in Peru, Bolivia and Easter Island that were noted by Robert Schoch in the Megalithomania expedition in November 2012. To date, less than ten percent of the site has been excavated. You can read an article about this fascinating site in National Geographic magazine published in June 2011 here: http://ngm.nationalgeographic.com/print/2011/06/gobekli-tepe/mann-text

Day 4 - Today you will enjoy a city tour of Urfa as well as visiting the ancient site of Harran.  Overnight in Urfa.

City of Harran, once the centre of Egypt's Hermetic tradition. See its ominous "Astrological Tower", citadel and local village and take in one of the most atmospheric sites anywhere in the world. Mentioned in the Book of Genesis, Harran is believed to have once been home to the Prophet Abraham. The site of the first Islamic university in Anatolia, Harran also boasts the remains of an 8th century mosque, a citadel and some 300 year old beehive mud homes which enjoy a constant temperature throughout the year, winter or summer.

Balikli Gol, or ‘The Legendary Pool of Sacred Fish’, is the site where Nimrod threw Abraham into the fire, located within the grounds of the mosque of Rahil-ur-Rahma and surrounded by ornate gardens. Riddled with a mythical enigma, the fish in the pool are said to thrive and a local legend even terms the pool, ‘the doorway to heaven’.

Day 5 - Drive to Gaziantep, stopping to see Halfeti, Rumkale and Zeugma Ancient City and continue to Gaziantep to explore the city enjoying the famous local cuisine. Overnight in Gaziantep

Rumkale translates to ‘Roman Castle’ and was once a powerful fortress, overlooking the river Euphrates. In ancient times a site of great strategic importance to Romans and Assyrians alike, the fortress is accessible by boat from the neighbouring Zeugma Region. Today, much of the lower-lying town area has been flooded, but the dramatically situated Rumkale helps you imagine the magnificence of the area in ancient times.

Zeugma, once at the forefront of ancient art and culture, boasts some of the most magnificent artworks and sculptures from ancient Turkey. Founded by one of the generals of Alexander the Great, the name ‘Zeugma’ means ‘bridge passage’ and refers to the city’s location on the river Euphrates and its former strategic importance in the silk trade route. When the site was excavated it turned up a number of beautiful mosaics, including the famous Gypsy girl mosaic now on display in the mosaics museum in Gaziantep alongside many others from Zeugma.

Day 6 - Visit the Zeugma Mosaic Museum then drive towards Antakya stopping on the way at the Yesemek Open Air Museum of the Hittite quarry which is now in UNSECO'S tentative list. Continue to Antakya , city tour of Antakya and stay overnight.

Day 7 -  Drive towards the Samandagi Mountains first visiting the only remaining Armenian village of Vakifli then continuing down the Roman water tunnel known as the Titus Tunnel and explore the beautiful Besikli Magara caves before climbing the hill known as the Hill of Wonders to visit St Simeon's Monastery, named after the famous Stylite. In the afternoon visit Hatay Archeological Museum where the world’s second largest mosaic collection is on display. Overnight in Antakya.

Day 8 - Take the early morning flight to Ankara. Today you will visit the impressive Ankara Anatolian Civilisation Museum and the famous archaeological site of Gordion. Overnight in Ankara

The Ankara Anatolian Civilisation Museum boasts many archaeological finds related to the excavations in Hattusa and Çatalhöyük, and will help you to gain a good understanding of these areas. The historical centre of Ankara sits overlooking the town on a hill and is littered with the remains of Hittite, Phrygian, Byzantine, Roman and Christian monuments and settlements. Of particular interest as a surviving example of ancient architecture is the Temple of Augustus. Often also referred to as ‘Angora’, Ankara is home to the Angora goat with its luxury wool and the unusual animal breeds of angora cats and rabbits.

Occupied since the Bronze Age, 4000 years ago, Gordion is one of the most important archaeological sites in the near east. The city enjoyed its golden age in the first millennium when it was the royal capital of the Iron Age Kingdom known as ‘Phrygia’ to the Greeks and ‘Mushki’ to the neighbouring Assyrian Empire. It is most famous for the story of the "Gordion Knot", where Alexander The Great solved the insoluble by slicing this particular knotty problem with his sword rather than unravel it - thus allowing him to conquer Asia.

Day 9 -  After an early breakfast, drive to the World Heritage Hittite Site of Hattusa and visit the site. In the afternoon drive to Cappadocia. Overnight in Cappadocia

Hattusa was once the centre of the Hittite Empire, dating back to the late Bronze Age. Set in what were once rich agricultural fields and among scenic, rolling hills, the city has some fine examples of early ancient architecture. Originally the inner city was a vast array of temples and monuments, overlooked by the royal residence on the acropolis. An architectural masterpiece in its time, the city gateway was once adorned with reliefs of warriors, lions and sphinxes, framing four temples, each of which had their own courtyard. The city was destroyed, along with the Hittites themselves, in the 12th century BC. By the 20th century, the principal remains of Hittite inscriptions were found on over 10,000 tablets

Day 11 - Explore Goreme open-air museum, Devrent Valley and go for a 4km walk in the Red Valley to visit some rock-hewn churches and fairy chimneys. Visit the Greek village of  Cavusin and the Valley of the Pigeons. Overnight in Cappadocia.

The Goreme Open-Air Museum has been a UNESCO World Heritage site since 1984 and is a vast complex of monasteries, each of which has its own church. These churches are the finest of the rock-cut churches, boasting beautiful frescoes (wall paintings).

Day 12- After breakfast, drive to Konya (305 km) stopping to visit the 13th century Seljuk caravanserai of Sultanhan en route. Later visit the ancient site of Çatalhöyük where excavations are ongoing. Take in a Whirling Dervish show in the evening if today falls on aSaturday. Overnight in Konya.

Çatalhöyük, widely believed to be the world’s first town, is one of the best preserved examples of a Neolithic and Chalcolithic settlement. Built around two hills of the Anatolian plateau, the settlement was inhabited for two thousand years between 7500 BC and 5700 BC. Çatalhöyük began life as a village and, unusually, in a time when village settlements were abandoned and new land used to build cities, the buildings were adapted and urbanised to accommodate a growing population. With a particularly advanced culture for its time, Çatalhöyük boasts impressive early artworks: unusual artistic wall paintings, flint daggers with decorated bone handles and most notably, the clay and marble figurines found scattered around the site which archaeologists take as evidence of a female deity. The housing designs are perhaps the most striking – all the houses were clustered together in a maze-like manner, but instead of streets or footpaths the roofs functioned as paths between the houses which were accessed through steps and ladders leading to the ceiling. With no windows either, these ‘doorways’ in the ceiling were also the only means of ventilation. Çatalhöyük also had unusual burial customs, burying their dead under the floorboards, painting skulls with ochre.

Known to its practitioners as “Sema”, the Mevlani worship ceremony - dubbed "Whirling Dervishes" in the West - is a ritual dance full of symbolism, and infused with meaning. It has been on the UNESCO Intangible Heritage List since 2008.

Day 13 - After breakfast, visit the holy Sufi site of Rumi's tomb. Later take a flight back to Istanbul and connect to your departure flight